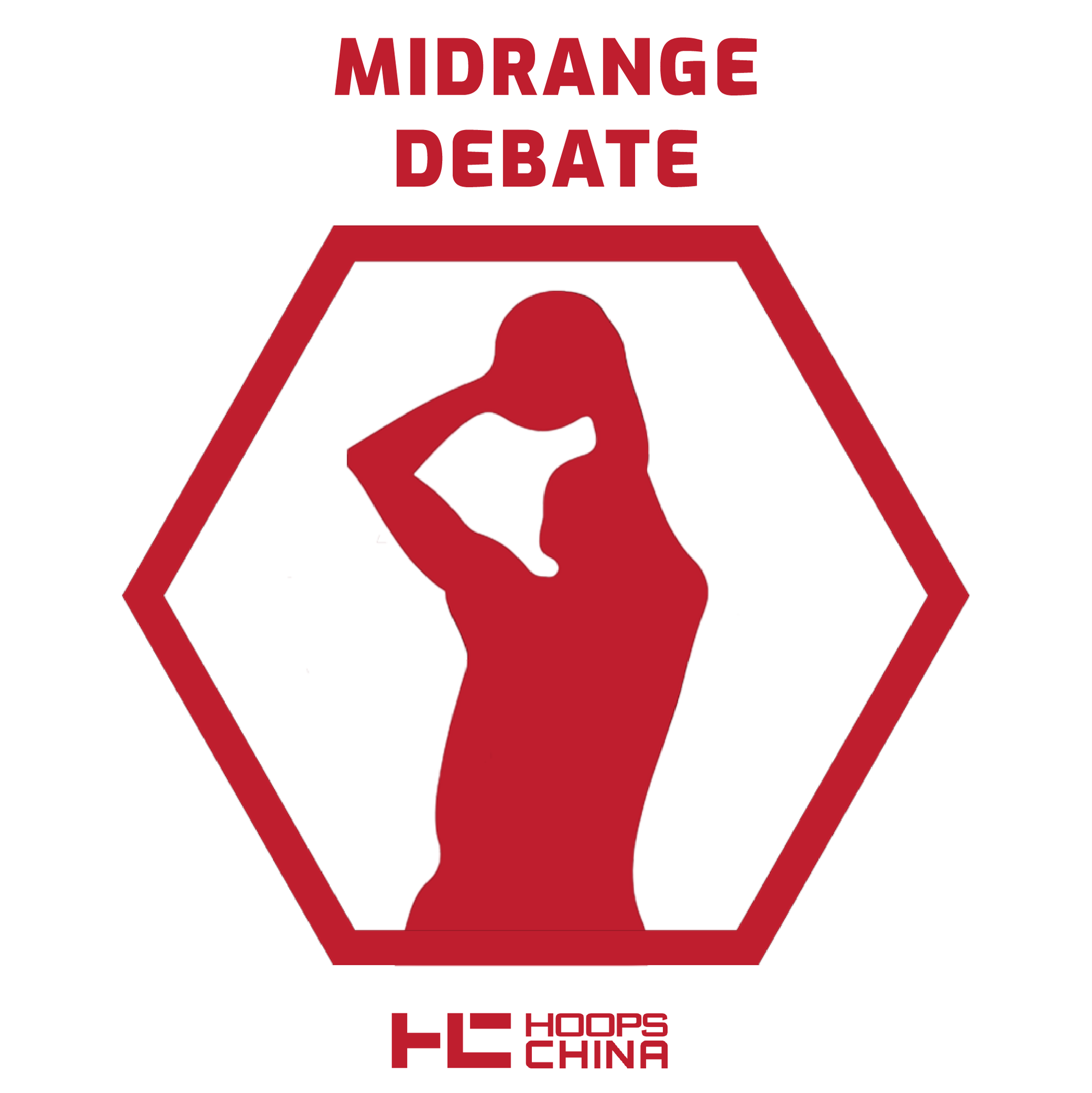 The Mid-range debate is a rather old debate for basketball analysts around the world especially in the NBA. Most teams have gone away from taking mid-range jumps shots and are encouraging the more valuable 3-point shoot because simple math will tell you that a long mid-range jump shot inside the 3-point line is the worst shot in basketball. This shift and change in shot selection is very drastic in the NBA, 35% of all shot attempts in the NBA this season were 3-pointers, a number that has increased dramatically each and every year, which was under 20% about 20 years ago. 20 years ago in the NBA, over 35% of all shots were mid range jumpers while it is around 20% now.

In this article our goal is to see how analytics in Basketball and trends the NBA has set in terms of style of play and shot selection has affected Chinese basketball. 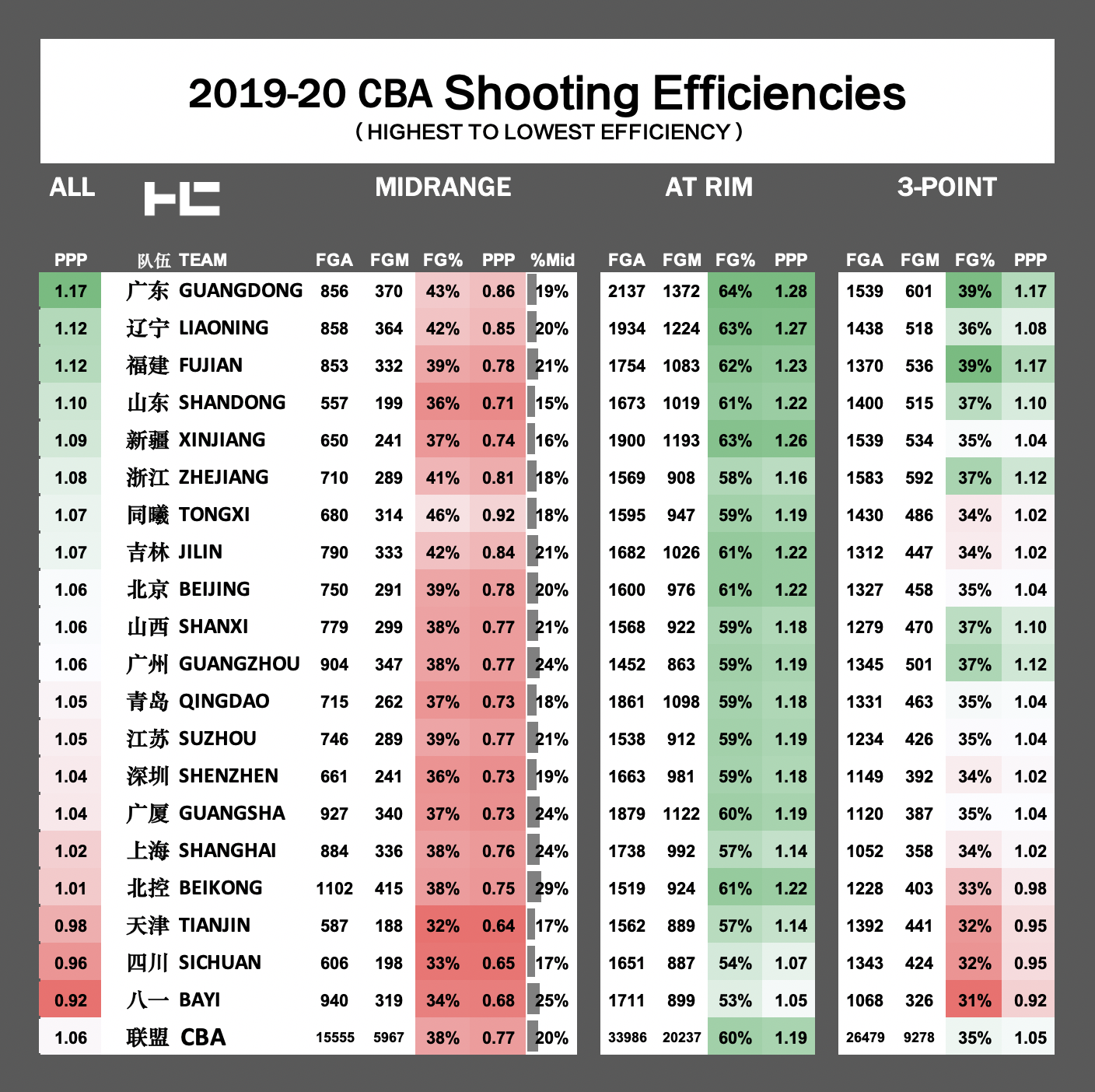 Looking at the 2019-20 CBA season we have separated shots into three categories, At Rim, Mid Range and Behind 3 point line. It can be clearly seen that the most efficient shot is at the rim where there where 33986 attempted and 20237 made which is 60% resulting in 1.19 PPP. It should be noted that this is not accounting for fouls which actually make shots at the rim even more valuable. There were 26479 shot attempted behind the 3 point line and 9278 made which is 35% resulting in 1.05 PPP because of the extra point a 3-point shot is worth. Two teams Shandong and Fujian actually shot a higher percentage from beyond the 3-point line than from midrange. Most importantly we now look at the midrange shot, a total of 15555 shots were attempted and 5967 made, which is 38% and only 0.77 PPP making it by far the worst location to shoot the ball. Therefore we can see that the same thing that happens in the NBA and other leagues around the world also applies to the CBA, the midrange shot is by far the worst shot in basketball. To some fans it may sound surprising that only 38% of all mid range shots in the CBA are made, but comparing this to the NBA we see similar numbers as only 41% of mid range shots are made. One thing we must mention about the NBA is that team defenses have shifted towards allowing opponents to shoot open midrange jump shots, and combing the fact that the NBA has the best players in the world, the fact that the NBA is only 3% better than the CBA is very reasonable. We see that finishing at the rim is actually better in the CBA than NBA, this is not because the CBA has better finishers, but actually the fact that the CBA lacks rim protection, and without adequate rim protection anyone can make a open layup or dunk. 3-point shooting is very similar between the NBA and CBA as the NBA 3-point line is further out which increases the difficulty, as well as elite close out defenders and therefore we can obviously conclude that the NBA has better 3-point shooters. Overall we see that the CBA only takes 20% of all shots from midrange which is actually lower than the NBA last season which was at 21%. This shows that the CBA has naturally caught up the world standards. We could argue that coaches and players are getting smarter or that this is just an organic result of the leagues lack of rim protection as we see a larger number of shots at the rim than the NBA.

Although it is positive to see Chinese basketball going away from the midrange shot and taking more threes and attacking the rim, we do need to consider the lack of defense in the CBA. The CBA is widely seen as an offensive league where a lack of athleticism, quickness and length which is often required for good defense is greatly lacking resulting in easy blow by drives and lack of rim protectors easy finishes at the rim. From our research we have found few teams to have rules that encourage more 3 point shots over midrange shots and believe that this result is not because teams are trying to do this intentionally, but just an organic result of playing to a teams strength and taking advantage of bad defense. The NBA also has a defensive 3-second rule, increasing the difficulty to protect the rim, but because of how athletically talented the league has become they still do a much better job than our players in the CBA. This even further increases the argument of how important rim protection is (add link) as it not only forces misses at the rim but also results in opponents taking more mid range jump shots.

The only situation where midrange jump shots are good shots are late in the shot clock, as the later you go into the shot clock the worse the offensive efficiency will be, with 24 second violation being the worst result as it is a turnover. There are times an open mid-range jump shot is a decent shot for some players, but for most it isn’t.

Next let’s take a closer look at individual players in the CBA who have taken more than 100 mid range attempts during the 2019-20 season. We can clearly make the same conclusion that even the players who take the most Midrange jump shots and are considered the best midrange shooters are not as good as we think, as not one players midrange shot is nearly as efficient as at the rim and the major of players who can shoot 3s are also much more efficient. 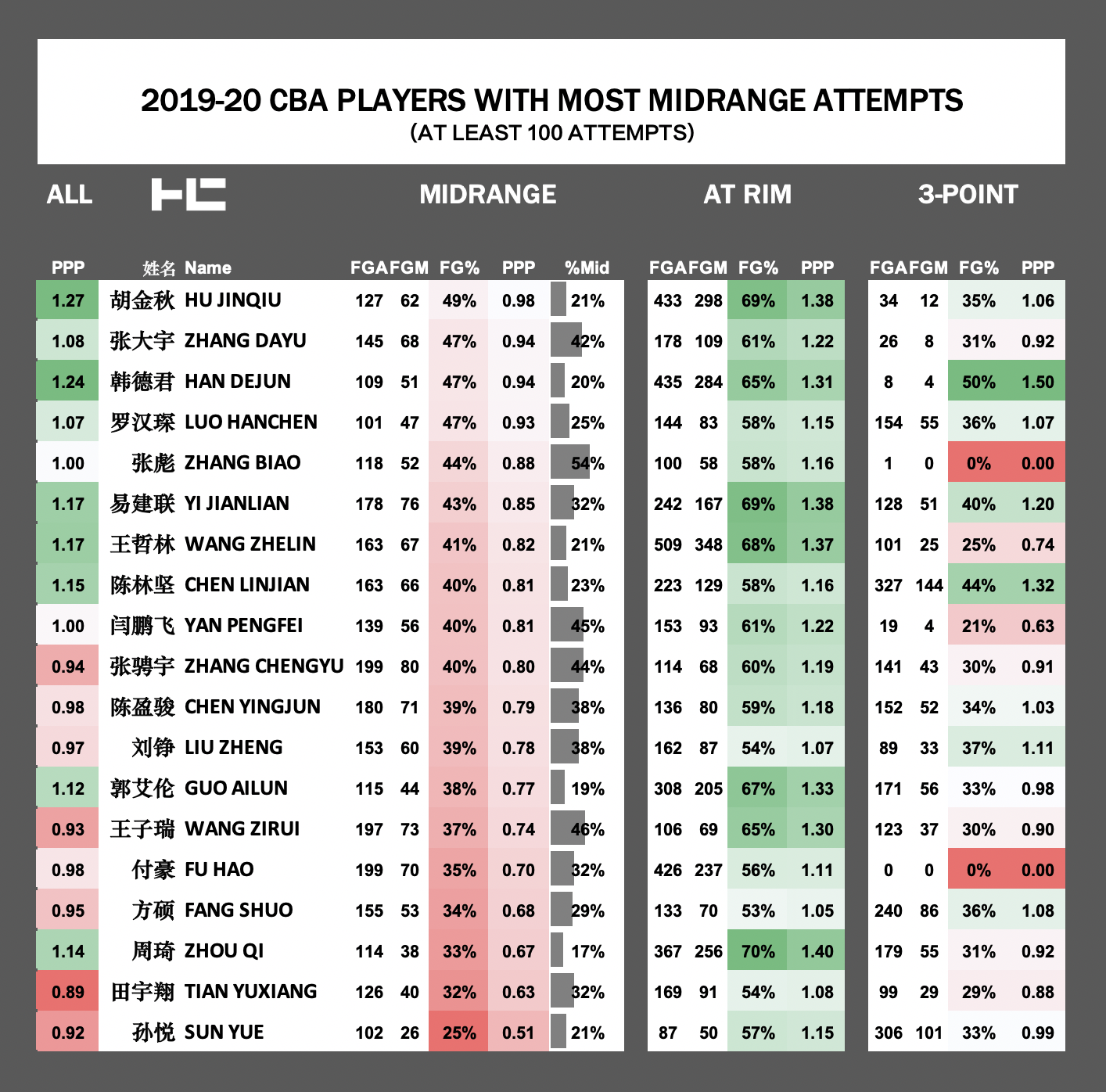 The best midrange shooter in the CBA is Hu Jinqiu, this is widely because he only takes open midrange jump shots and mostly in catch and shoot situations. Of course he is an adequate mid range shooter but there are better shooters in China who shoot far worse percentages because of the degree of difficulty of the shots they take.

Looking at the best player in China Yi Jianlian we see that he is an adequate midrange shooter but compared to his shots at the rim or from behind the 3 point line it is a far less inefficient shot. As he only shoots 1% higher from Mid-Range (41%) compared to from behind the 3-point line (40%), but because the 3-point shot isn’t worth an extra point the PPP is drastically higher at 1.19 compared to 0.81 for the midrange jump shot. In his case he should be taking a lot more 3-point shots instead of midrange jump shots, which is also why we see bigs in the NBA all taking 3s now instead of mid-range jump shots, because it is a much more efficient shot and gives your team a better chance to win games.

We clearly see that the best midrange shooting percentages actually come from bigs, who don’t dribble the ball and mostly only shoot on catch and shoot scenarios.  Zhou Qi would be an exception as he was not a good overall shooter from anywhere and should probably stick to finishing at the rim where he makes 70% of shots compared to only 33% from midrange and 31% from 3.

Widely considered a good shooter by many, Fang Shuo is actually a very inefficient player because of his poor shot selection and taking a large amount of midrange shots off the dribble often off balance, only making 34% of them, actually lower than his 36% three point shooting. We would strongly suggest Fang Shuo to take many more 3 point shots instead of pulling up from midrange, as he would help his team a lot more in terms of winning games. His lack of efficiency is also why he is not ranked in our top50 players in the CBA.

Sun Yue was the worst midrange shooter in China that took over 100 attempts shooting a horrific 25%. 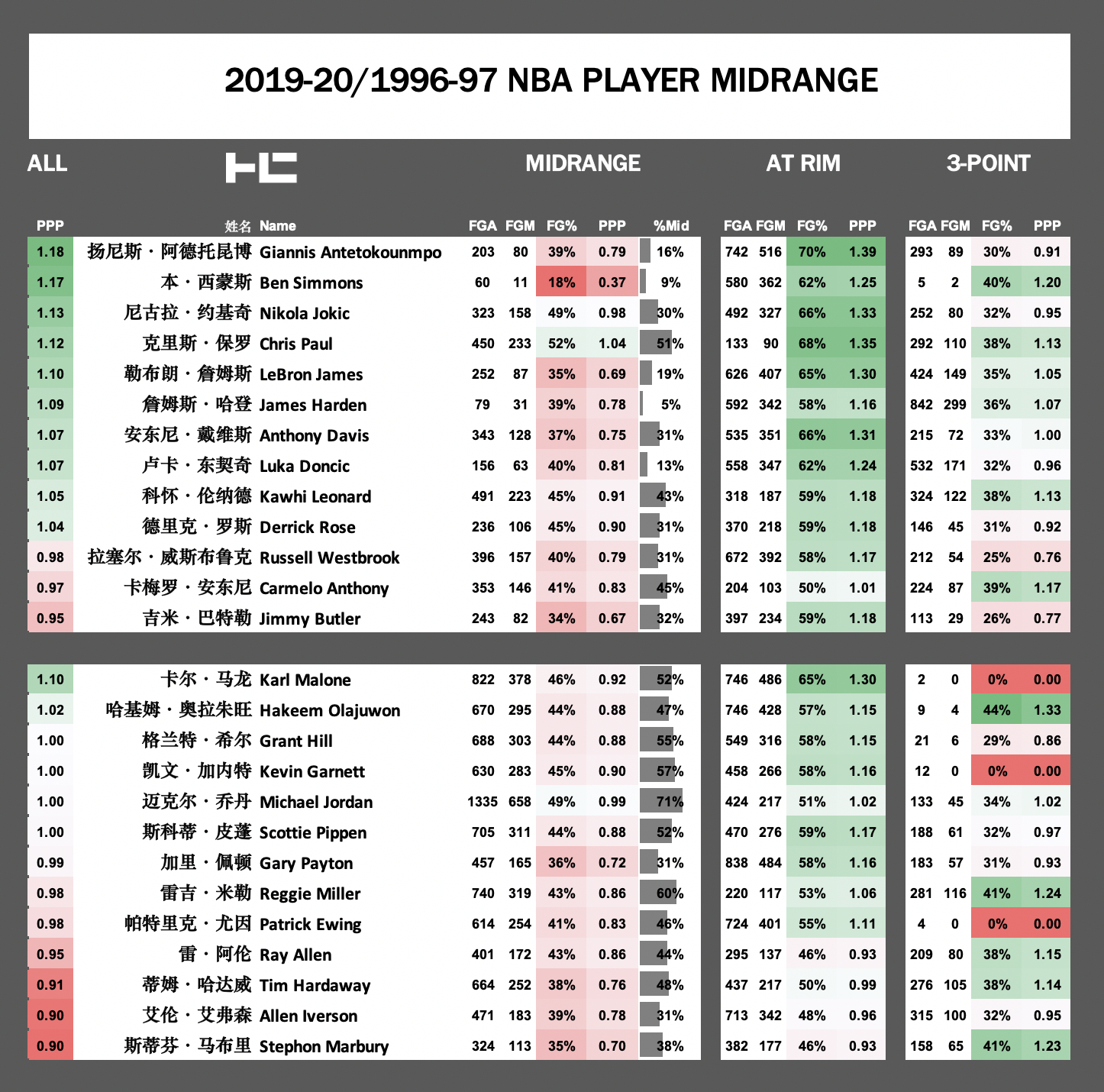 Because there is no data available from the 90s in the CBA we have gathered the oldest shooting data available from the NBA which was the 1996-97 season and took the star players of that time to compare to today’s NBA stars. We can clearly see that players now take far less midrange jumpshots and a lot more 3-pointers than in the last. The offensive efficiency is far higher because of it. The GOAT Micheal Jordan actually took 71% of his shots from midrange and made 49% of them often including fade-away and high difficulty shots. It must bad noted that there was no defensive three second rule yet (which was introduced during the 2001-02 season) and finishing at the rim was much more difficult than it is now therefore players ore often settling for the mid range shot. And even Jordan, the master in the mid-range game was actually more efficient from 3-point and at the rim. 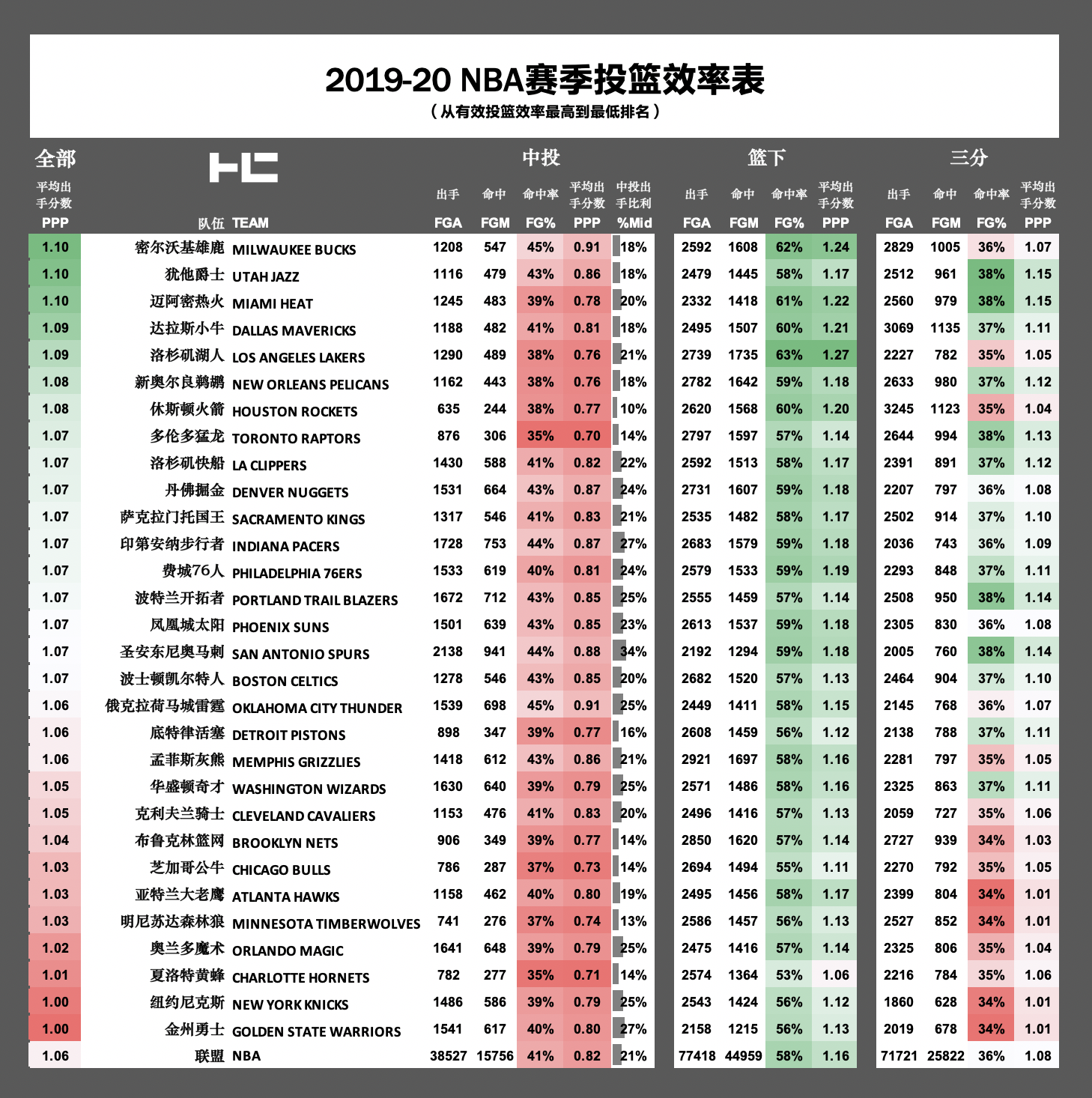 The NBA has grown into the data analytics era of today and teams like the Houston Rockets took it to an extreme as the team only takes 10% of its shots from midrange and star player James Harden only 5%. This is obviously driven by former GM Daryl Morey who also traded Clint Capela to form a small ball lineup. We will see new trends with new rule changes and teams proving to have success playing a certain way, but as of right now the midrange jump shot is the worst shot in basketball and this holds true in the NBA as well as the CBA. We will further explore if this holds true in different levels in China such as the CUBA , CHBL or even wildball tournaments in the future, but we hope that we have convinced our fans that at least at the CBA level most players should be discouraged from taking midrange jump shots, but instead looking to get a better shot for himself or a teammate.

In conclusion, although there are players who are capable of making mid-range jump shots it is clearly by far the worst efficient shot location in the game of basketball. Especially in the CBA where defense is relatively bad and there is a lack of rim protection, coaches and players should prioritize attacking the rim or looking for open 3 point shooters instead.